The team at Jeppeson2001 has recently taken to their Facebook page to announce the release of their rendition of Victoria Falls for Microsoft Flight Simulator. The developers have also announced the release through a trailer posted on their Youtube channel.

The package contains four bush strips and six heliports with multiple starting spots, they are located across two countries, Zimbabwe and Zambia. In total, the scenery features 30 landable helipads. Furthermore, the developers have brought to life the Victoria Falls Bridge with an animated bungee jumper, this is a slight touch. Still, it gives the user an even more immersive experience.

Besides that, the team has modelled other animated objects, those include a microlight, a speed board, a raft as well as a cable car. They have also brought to life river boats and tourist hotels. The Victoria Falls are fully animated with sounds and mist effects. This scenery pack is perfect for users who like bush flying or who are helicopter pilots.

Victoria Falls is the world’s largest sheet of falling water. Victoria Falls are roughly twice the height of North America’s Niagara Falls and well over twice its width. There are many bush strips and heliports in the vicinity.

If you wish to purchase this scenery package, you can do so through simMarket for 16.94€. 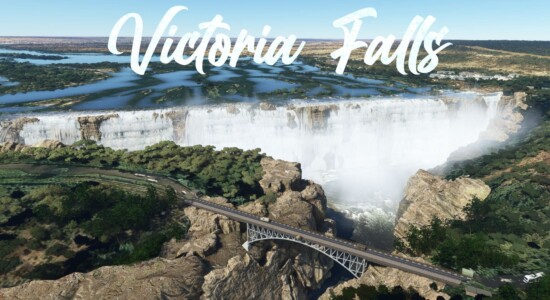